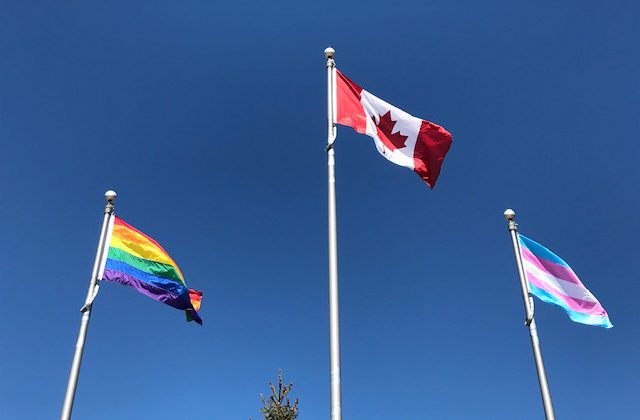 After an eight day pause, Pride Month celebrations are underway in Kemptville.

According to Pride’s Queen of Communications, Fiona McKenney, while they are unable to host a parade for a second straight year, they have lots of activities planned for residents to learn more about the local LGBTQ+ community.

On Wednesday, the municipality raised the Pride flag at the North Grenville Municipal Building to mark celebrations.

McKenney says the focus for this year is celebrating Pride in the rural areas.

“Small towns have not always been welcoming and we wanted to show that smaller towns are coming around to make people feel comfortable and live their lives how they choose,” McKenney said.

Kemptville Pride began the month with a 215-hour pause on their events, to honour the lives of the children whose bodies were found at a residential school in B.C.

With celebrations now underway, McKenney says they’re encouraging residents and businesses to deck out their properties with Pride colours.

It’s her hope that by bringing awareness to what people in the LGBTQ+ face on a daily basis, it may open the door for more resources to support them locally.

“We want more clubs in schools, and places where kids can go who are questioning,” McKenney said. “Or even just education at workplaces who can teach about the proper use of pronouns, and how to be inclusive.”

To view all the events and contests through the month, you can head to Kemptville Pride’s website.