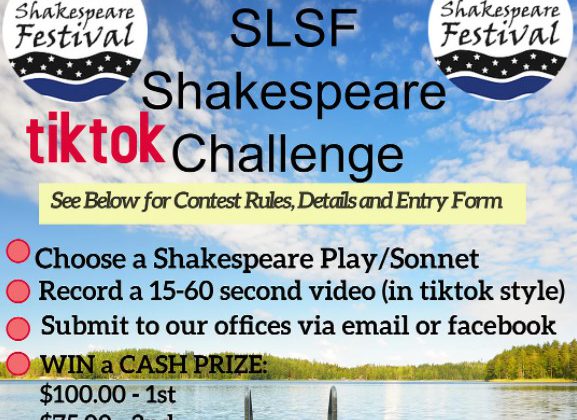 The St. Lawrence Shakespeare Festival is issuing a challenge to residents to get creative for its latest contest.

The festival has launched a ‘Shakespeare Challenge’, asking residents to re-enact a scene from any of Shakespeare’s plays in a video format using TikTok.

Artistic Director Richard Willis says they want to provide an opportunity for residents to express their creativity.

“When Shakespeare’s birthday came around, we decided we wanted to do something that would help or at least encourage people to be creative, which is where we came up with the idea for a Shakespeare TikTok challenge,” Willis said.

Cash prizes will be awarded to the top three entries, and Willis says there are multiple ways to enter.

He says they wanted to do something fun, while they continue to plan their 2021 season.

“You submit a video that’s 15-60 seconds in length, and base it on any scene, any act, any play from William Shakespeare, and just get creative with it,” Willis said.

To submit, you can email the festival here, or you can send it through Facebook Messenger on the St. Lawrence Shakespeare Festival Facebook page.

The deadline for submissions is June 1st.