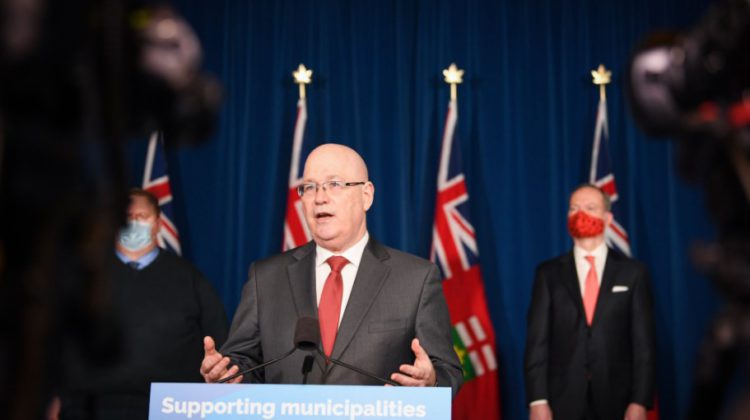 The MPP for Leeds-Grenville-Thousand Islands and Rideau Lakes is very happy to see some local investment out of Ontario’s 2021 budget.

Clark says this includes investments to support people and jobs in our riding, including the new and upgraded  long term care beds announced for Wellington House last week.

“$5.1 billion is going to local hospitals, so Kemptville, Brockville, Perth and Smiths Falls, which will create more hospital beds and we’re increasing our support for them,” Clark said. “We’re also expanding the Community Paramedicine, and just up the road in Ottawa, we’re getting a new 200,000 square foot treatment centre at the Children’s Hospital of Eastern Ontario.

Clark adds that many in the community have made sacrifices to help reach the day when the pandemic is behind us.

He says the one thing the pandemic has brought to the forefront is the need for reliable broadband internet in our communities.

Clark says this budget will invest $2.8 billion to expand broadband and bring better internet to residents.

“We need good reliable broadband, and our budget makes a commitment like no other province in the country has to date. It’s a real significant investment to get broadband to people’s houses and I just think it’s a real game changer when it comes to the economy,” Clark said.

Opposition Speaks Out Against Budget

The Conservative budget was slammed by the leader of the Opposition, Andrea Horwath.

In a statement Horwath said if this were an NDP budget it would have funded paid sick days and offered paid leave for workers to get the COVID-19 vaccination.

“Ontarians deserved a budget that gave them help getting to the other side of the pandemic, and hope for a future they can look forward to,” she said.

Liberal Leader Stephen Del Duca said while he welcomes the increase in spending on health care it falls “woefully short of what Ontarians need.”

Meanwhile, teachers’ unions have slammed the Ford budget for a lack of spending on education.

In a joint statement they claim the Ford government has failed to deliver a budget that keeps up with the rate of inflation and enrollment.

The unions are calling on the province to invest in lower class sizes, enhanced safety measures, mental health support, and support for students with special education needs.