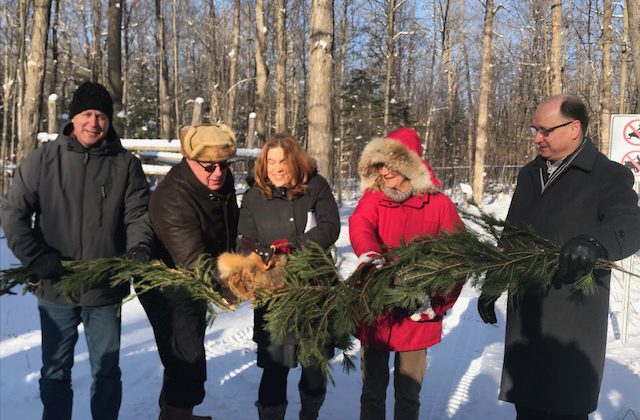 The Kemptville Campus has achieved Forest Stewardship Council (FSC) certification through the Eastern Ontario Model Forest. The announcement was made today at the Agroforestry Centre.

Jim Hendry, Forest Certification Coordinator, says the process is about ensuring the highest quality of sustainable management. He noted it has three core elements: what you do must be socially responsible, environmentally responsible and economically viable.

The FSC seal of approval will be stamped on the maple syrup produced on the campus. Frank Heerkens, owner of On the Bend Sugar Shack, has been operating the formerly dormant sugarbush at the campus for the past four years.

He noted the campus has between 25 and 30 acres of maples, which can produce up to 1,000 litres of maple syrup annually. Heerkens explained the certification elevates the reputation of his products, which are available at Moose Mart in Kemptville and Winchester BMR. He says On the Bend offers a variety of products, including maple sugar, maple butter and barbecue sauce.

Heerkens, a member of the Maple Syrup Producers’ Association, says it took a lot of work to get the facility and sugarbush in order. His plan is to continue making improvements over the next few years.