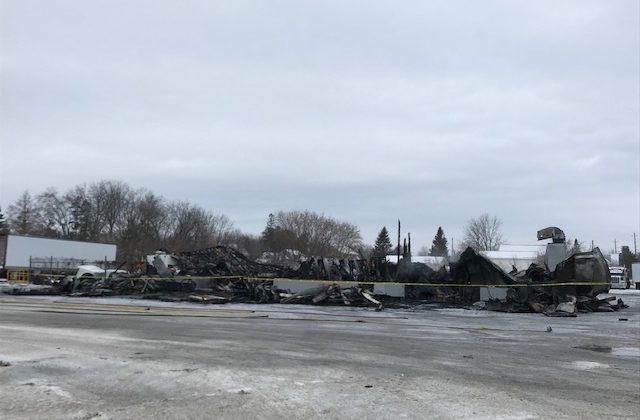 A building at the Tallman Collision Centre on Van Buren Street was razed to the ground. (Jennifer Westendorp, mykemptvillenow.com staff)

One of the buildings at the Tallman Collision Centre on Van Buren Street is no more. The auto body shop, located behind the main structure, was completely destroyed by fire early this morning.

Fire Chief John Okum says the North Grenville Fire Service (NGFS) got the call minutes after midnight. He noted when firefighters arrived on scene, heavy flames were coming from the building. Okum explained it was apparent the fire was well advanced at that time.

The Merrickville Fire Department and Edwardsburgh/Cardinal Fire Department provided mutual aid. No one was in the building at the time and no firefighter was injured while battling the blaze.

Okum says the fire was brought under control a few hours later. He noted the roof had collapsed and heavy equipment was brought in to get the hot spots under control. Okum explained the structure and all its contents were lost, but the value is not known at this time.

He says the fire is under investigation at this time and there’s no indication of what started it. He noted the NGFS has been in consultation with the Office of the Fire Marhsal and it’s unlikely the cause will be determined due to the extent of the damage.

The Ministry of the Environment was notified about the fire due to the nature of the structure.