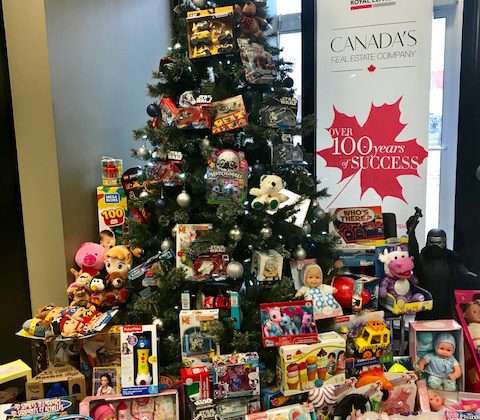 Royal LePage is kicking off its Mountain of Toys campaign. The launch is set for Friday night, at the Kemptville 73’s game. The puck drops at 7:30pm at the North Grenville Municipal Centre. Bring a new, unwrapped toy to watch the game at a reduced rate.

Organizer Judy Littau says Royal LePage has been doing the toy drive for over 20 years and collects hundreds of toys annually. She noted the toys go to families who register for a Christmas hamper through the Salvation Army or North Grenville Community Service Council.

Littau explained the nice thing about the toy drive is that absolutely everything stays in North Grenville.

Royal LePage will also be collecting toys at the Santa Claus Parade on Saturday. The parade starts at 5:00pm, leaving from the Kemptville Campus and heading down Prescott and Clothier.

People can also drop off donations at the Royal LePage office, located at 304 Colonnade Drive, during business hours. If you have a toy to donate and can’t drop it off, call 613-258-1990 to arrange pick-up. Collection will run until December 10.

Littau says popular items this year include Pokemon, L.O.L. dolls and arts and crafts. She noted the older boys like Canadian Tire gift cards and older girls like makeup.