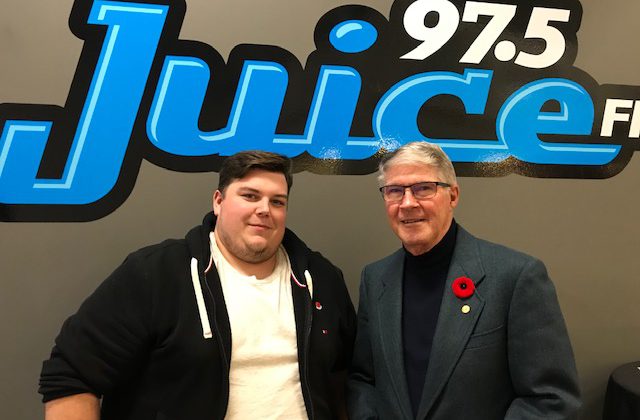 The Royal Canadian Legion Branch 212 is getting ready for Remembrance Day. The service starts at 10:30am on Monday. Local veterans will march from the Legion to the Cenotaph on Prescott Street. Members of the public are encouraged to attend.

Donovan Arnaud, retired naval officer, says November 11 is a time to reflect on the sacrifices made to protect the freedoms of all Canadian. He explained in times of peace, it’s easy to forget the past.

Arnaud served in the Royal Canadian Navy for 25 years. His father was a combat veteran who served in the Second World War. Arnaud noted his dad saw a lot of death and destruction. He explained his father taught him that war is not the way to go as a civilization.

Peter Milsom, who served 38 years with National Defence, says what concerns him is the things that happened that most Canadians don’t know about. He noted the Cold War, which lasted from 1947 to 1989, is largely ignored in history books.

Milsom says Canadians have gone all over the world since 1866 to defend Canadian interests in 21 different conflicts. He explained the best tribute is to understand the nature of the conflicts and the conditions under which they were fought.

Milsom’s father was a naval officer who survived being sunk off Gibraltar and was awarded the Order of British Empire.

The annual poppy campaign is currently underway, with all proceeds going to programs for veterans.