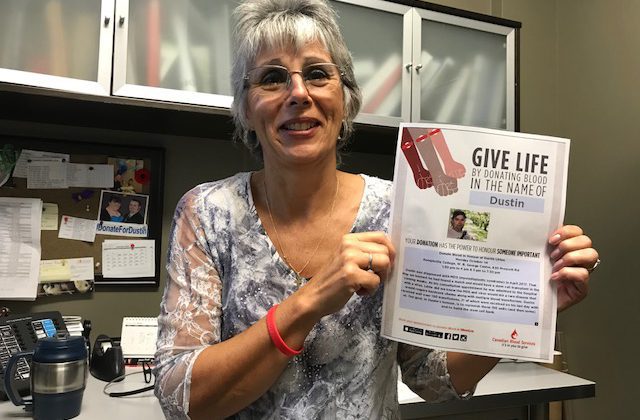 Judy Littau says she got extra time with her son thanks to people who donate blood. Dustin Littau passed away on July 19, 2017, after battling MDS (Myelodysplastic Syndrome) and HLH (Hemophagocytic lymphohistiocytosis).

Canadian Blood Services is holding a blood donor clinic in honour of Dustin on Monday. It runs from 1:30 to 4:00pm and 5:30 to 8:00pm at the W.B. George Centre on the Kemptville Campus.

She explained over the course of 11 weeks, Dustin used over 150 units of blood and a lot of those were platelets. Judy noted it takes between three and five blood donations to make one unit of platelets.

She says it’s simple to donate and doesn’t take much time. Judy explained that she met a woman from Grenville Mutual Insurance during the last clinic held in Dustin’s honour and she brought along some of her co-workers who had never donated before. She says it’s a good challenge for businesses in North Grenville to encourage their staff to donate blood.