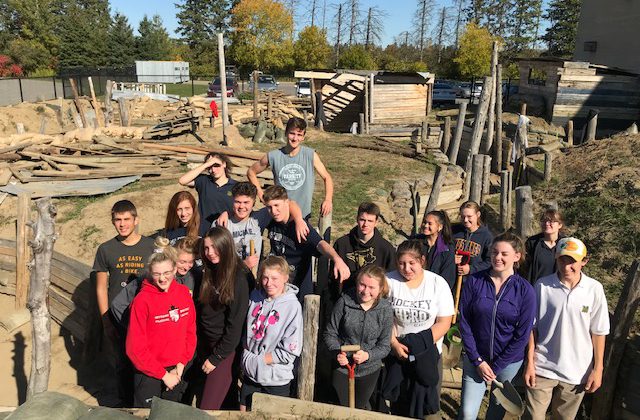 Grade 11 students at St. Michael Catholic School in Kemptville were hard at work repairing the trenches to get ready for Remembrance Day. (Jennifer Westendorp, mykemptvillenow.com)

Teacher Fred Bortolussi says the project started in 2006, but had to be relocated to make way for an addition at the school. He noted the students started all over again in 2013 and work on the trenches annually.

Bortolussi says there’s a frontline trench, communication trenches, reserve trench in the back, bunkers, machine gun posts and a tunnel simulating the one from the 1917 Battle of Vimy Ridge.

Bortolussi explained Canadian winters can be brutal and cause damage not unlike what it would be like if artillery shells had landed and blown it apart. He says the students had to take out all the posts and redo the sandbags for support this year.

He noted students and staff beg, borrow and steal all the materials for the trenches. Bortolussi says it’s an invaluable teaching tool. He explained students need to know the history of World War One so it doesn’t happen again. Bortolussi says that’s what Lest We Forget is all about.

He noted the goal is to open the trenches to the public on the weekend prior to Remembrance Day. Plans for a special ceremony on November 11 are in the works.

Parliament to sit in-person once a week