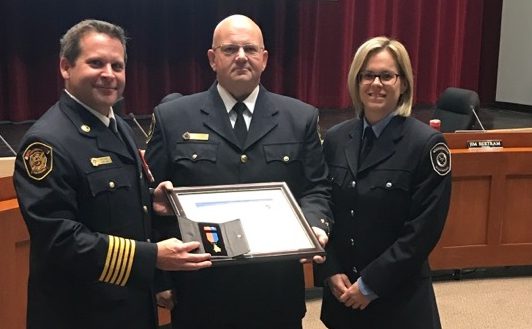 North Grenville lost one it’s own. James Petersen, bylaw officer and volunteer firefighter, passed away suddenly over the weekend. The cause of death is unknown at this time.

Almost one year ago to the day, Petersen was recognized for 25 years of service by the Municipal Law Enforcement Officers’ Association of Ontario. He has served North Grenville for two decades and the City of Nepean before that.

Fire Chief John Okum says Petersen had quite a spirit about him. He noted James enjoyed a good laugh and was always ready with a joke. Okum says Petersen was very dedicated to his position and dealt with bylaw issues in a fair manner.

Petersen organized the annual Muscular Dystrophy Boot Drive. The initiative brought in around $43,000 over the past six years.

Okum says James will be missed by his colleagues, in Emergency & Protective Services and the entire municipality. He explained Petersen created a lot of great friendships.