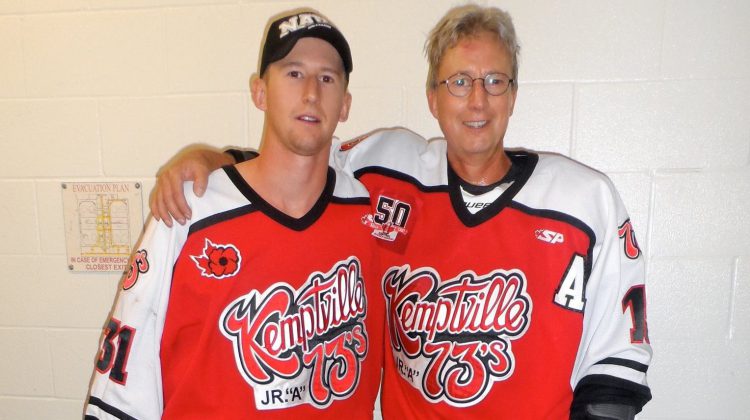 Both Master Corporal Martin Brayman and his dad Joel Brayman played for the Kemptville 73’s. The pair is pictured attending the team’s 40th anniversary alumni game. (Supplied by the Brayman family)

Master Corporal Martin Brayman’s family set out to raise $1,000 for every year of his life. The 32-year-old died following an assault in Florida earlier this month.

The Marty Brayman Kids Hockey Fund has brought in $37,770 to date. The money will be used to pay for local kids to play hockey.

Joel Brayman, Marty’s dad, says the original plan was to cover the cost of registration and equipment for at least one underprivileged child annually. He explained the family thought about it further and decided it wouldn’t be fair to get kids into hockey and leave them hanging the following year.

Brayman says the new goal is to raise as much money as possible to pay for kids to stay in hockey until they lose interest or their financial situation changes. He noted the family has partnered with Big Brothers Big Sisters to identify kids in need. People can also reach out directly to the family, by emailing martybraymanhockeyfund@gmail.com, if they know someone who could benefit from the fund. Three children have already been selected.

Brayman says people have been extremely generous and he wants them to know that the money is being administered correctly and every dollar will be going to local kids.