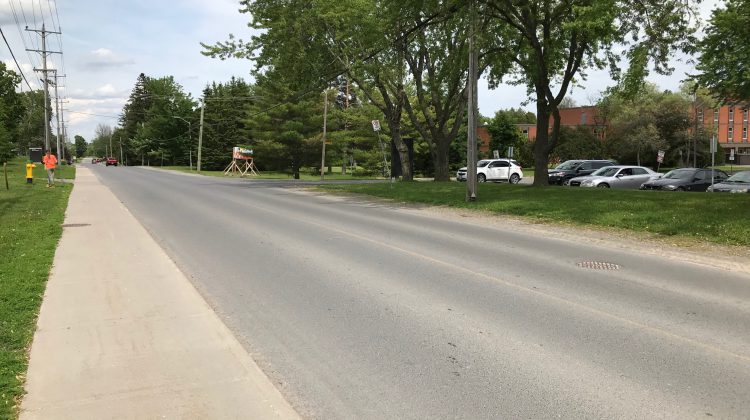 Concession Road is getting a crosswalk at Campus Drive. (Dan Mellon, mykemptvillenow.com staff)

Concession Road is getting a crosswalk at Campus Drive. The matter was initially discussed in April, when WSP Consulting brought forward traffic calming measures for council to consider. WSP recommended a painted crosswalk with signs, at a cost of $1,800, based on pedestrian volume measured in November.

Council directed staff to look at the traffic count again, during the warmer months, to see if there was a difference. The same class of crosswalk was recommended to Committee of the Whole last week.

Councillor John Barclay asked for the resolution to be amended Tuesday night, to include an upgraded crosswalk. He noted Concession is a community safety zone, with two schools, daycare, hospital and the Kemptville Campus.

Council voted in favour of the upgraded crosswalk, including streetlights and push button, totalling $42,000 more. One-time federal gas tax funding will be used to cover the additional cost.

Councillor Kristin Strackerjan says the problem with the data in this case is that there won’t be an increase in foot traffic until it’s a safer road to cross.