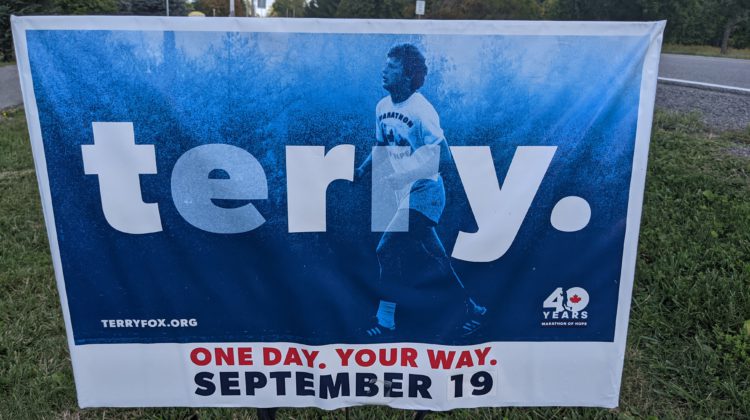 With restrictions on in-person gatherings still in place, this year’s Terry Fox Run is being held online.

The annual event, where runners across Canada raise money for cancer research, is normally held in Kemptville at the Ferguson Forest Center, but in 2020, a virtual run was set up, with participants running apart from each other, socially distanced. This year’s run is being done in the same way.

Steve Paterson, a volunteer with the Terry Fox Foundation, says in an exclusive interview with MyKemptvilleNow.com that people who are interested can participate in a number of ways. “It’s always called the Terry Fox Run,” says Paterson, “but that’s flexible. It can be a walk, it can be a bike. If you’re brave enough, you could do a swim, at this time of year, if you want to.”

Paterson also stressed the importance of continuing cancer research, even as the pandemic continues. “With COVID and the pandemic, obviously that’s at the forefront of everyone’s mind, but cancer does not stop.”

“There’s still people dying from cancer and being diagnosed with cancer on a daily basis, so if we can continue in Terry’s dream – like he said, ‘it’s gotta keep going without me, somewhere the hurting must stop.’ If we can do what we can to help meet that goal, that’s always a good thing.”

The official date for the run is September 19th. The North Grenville event has raised almost four thousand dollars so far. Visit the Terry Fox website for more information on how to donate or register.