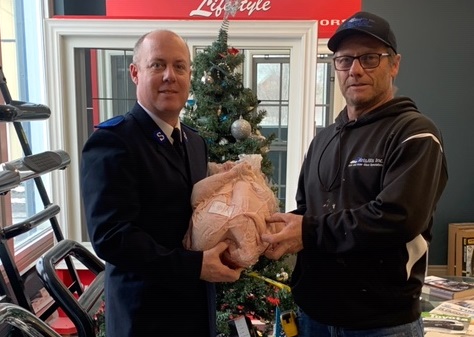 Families in North Grenville will get a turkey dinner this Christmas thanks to a local man. The Kemptville Salvation Army received 30 turkeys from Rob McNamara, owner of KrisAlis Glass.

Director Calvin Wong says McNamara raised the turkeys himself and paid for the butchering and packaging. He noted the donation totalled over 200 pounds of meat. The turkeys will be distributed through the Christmas hamper program.

Wong says this is not the first time McNamara has lent a hand. He explained McNamara has also helped food bank clients with building needs, such as repairing furnaces and sump pumps that have broken down. Wong noted he volunteers his time to get things fixed.

Jim Beveridge, owner of B&H Grocer, offered to store the meat in his freezer until the Christmas hampers are handed out later this month.