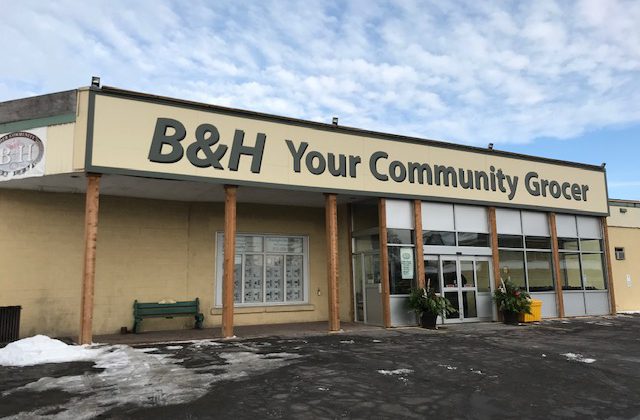 B&H Grocer can be viewed on the big screen this Saturday. (Jennifer Westendorp, mykemptvillenow.com staff)

B&H Grocer is hitting the big screen. The world premiere of Turkey Drop, from Muse Entertainment, is set for Saturday night on Freeform in the United States. A scene for the movie was filmed at B&H back in September. A Muse representative says the movie hasn’t been picked up by a Canadian network yet.

The movie stars Olivia Holt, from Marvel’s Cloak & Dagger, and was written by Tiffany Paulsen.

Jim Beveridge, B&H owner, says Turkey Drop is the expression used when a young person comes home from university and gets dumped by their high school sweetheart at Thanksgiving. He noted three main actors and many extras were in town for the filming, which shut down the store for two days.

Beveridge explained parts of the filming were interesting, with a lot of down time in between. He says the floral section was converted into a liquor store and the deli case became a small butcher shop. Beveridge noted visual effects were used to make it look fuller.

He says he may not get the chance to watch the premiere, but he looks forward to watching the movie. This is the first time B&H Grocer has been featured in a movie and may not be the last, according to Beveridge.