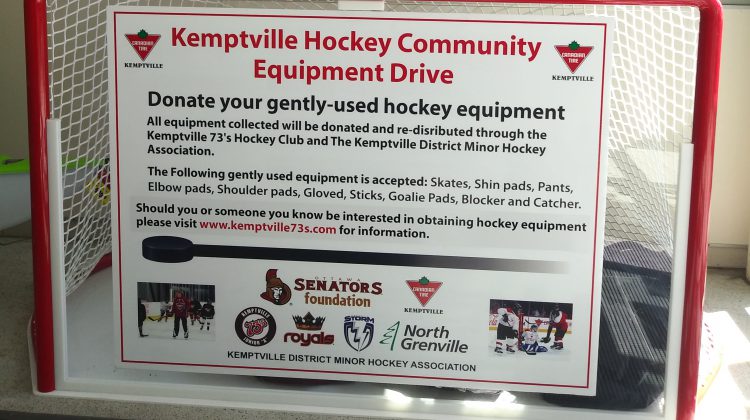 Time to pass on those skates, helmets and pads your kids no longer need. The Kemptville 73’s, in partnership with Canadian Tire and the Kemptville District Minor Hockey Association, is running a gently-used and new equipment drive.

Donations can be dropped off at Canadian Tire, in a customized NHL hockey net courtesy the Ottawa Senators Foundation, from now until August 9.

Jason York, 73’s co-owner and coach, says the team is always looking for new ways to help out locally. He noted fellow owners Paul Le Breux and Joe Jefferies, along with their spouses, and Canadian Tire owner Frank Hoffman, are passionate about getting more kids involved in sports.

York says kids 12 and under get in free to all 73’s games. He noted the team doesn’t want to make money off kids. York explained money was tight growing up and he started a paper route at the age of 6 to help pay for hockey. He says letting kids in for free is a no-brainer.

The donated equipment will be handed out on August 11 at the North Grenville Municipal Centre, between 12:00 noon and 4:00pm. Kids are welcome to drop by and get fitted-up, according to York. He says the 73’s will also be doing a free skills clinic that day, starting at 3:00pm, for kids between the ages of 6 and 11.